Question - Why is lactate relevant?

Why is Lactate physiologically important for an athlete?
During training and competition, the body needs fuel to produce energy that the muscles use in the specific event. The two main energy systems are the aerobic and anaerobic systems*. Lactate is the output of the anaerobic system; after that it performs its most important function. It is the main fuel for the aerobic system during competition and much of training. A very persistent myth is that lactate is a waste product. Nothing could be further from the truth. It is amazing how some erroneous ideas are hard to kill. It is actually a major fuel source for the heart and the brain as well as skeletal muscles during strenuous efforts.

Measuring lactate is a way of assessing how strong each energy system is, or essentially how well-conditioned the athlete is at a specific point in time. No other measure provides this information. Thus, measuring lactate with an appropriate test is the best way to assess the conditioning level of an athlete during training and prior to a competitive event.

Because of this, periodic lactate testing is the best way to know if the training of an athlete is working and will lead to an optimal performance.

*There are actually two anaerobic systems but only one plays a role in most athletic events. A much more detailed discussion of anaerobic energy production and lactate is on our triathlon site.

What do you mean by measuring lactate?
Lactate is very common in the body. It is in the muscles, the bloodstream, and between the cells in interstitial fluids. It is also in sweat and saliva and on skin. To measure lactate it is necessary to collect some liquid or tissue where it exists. The most common place to measure lactate is in the blood.

Theoretically the best place to measure lactate to see what is happening during exercise and competition is in the muscles themselves. But this is impossible without doing muscle biopsies, which are expensive and not practical. However, levels in blood will reflect pretty accurately what is happening in the muscles. But because it takes time for the lactate to leave the muscles and get to an equilibrium state in the bloodstream, the protocol for measuring lactate must be appropriately timed.

But there is an effort level so high that there is no equilibrium — lactate levels in the muscles will continually increase. Because of this, lactate levels in the bloodstream also continually increase. This level, where equilibrium is no longer possible, is very important for race performance. The metabolism within some contracting muscles will change dramatically; this affects how fast the athlete can compete. We will call this effort level "the lactate threshold." We recognize that many others do not use the term "the lactate threshold" as we do. This will be discussed in detail in subsequent questions.

A lactate analyzer measures the lactate in a blood drop. Researchers have tried to use saliva and sweat to measure lactate, but the levels and response time are not predictable, and do not correlate well with muscle latate. There are attempts at this writing in 2015 where some devices are trying to predict lactate levels from oxygen flow in the blood stream. So far this is very experimental. Hence nearly every lactate test is still done using a blood drop. Years ago this was done only by researchers or technicians in a laboratory setting. But today portable lactate analyzers are relatively inexpensive, very accurate and widely available. For most athletes there is no economical reason not to measure lactate.

So if someone says that is it difficult to measure lactate, they are apparently not aware of how easy it is today. Athletes may decide that they do not want to measure lactate because of cost, or because they think they can get the same information in other ways, or because they don’t want to prick the skin, or because they do not know what to do with the results, or for a variety of other reasons. This site, hopefully, will show the coach and athlete just how to use lactate test results. There is no other convenient way to get the same information.

Here is a chart that shows the correlation between lactate tests and performance.

Here is another study that showed that lactate measures correlate highly with a cycling time trial. The subjects in this study were women cyclists. They each were tested using a graded exercise test and for VO2 max. They then performed a one-hour time trial a week later. 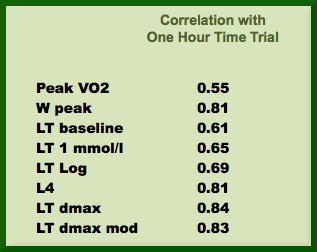 One might ask, which is the easiest of all these lactate tests? (see previous question above)
We haven't a clue how to do the LT Log test and we have been involved in lactate testing for 20 years. We suspect that few coaches would know either. It is basically an exercise for academics and has little relevance for training athletes. The LT baseline is a relatively easy approach. Here is an example of a test done on a college soccer player. But then again, it may be difficult to pinpoint the exact place where the curve begins to rise.

And there are times when it is difficult to measure a baseline. For example, where is the baseline on the following lactate curve? This curve would also cause a problem for those using the LT 1 mmol/l approach. Picking the point becomes a little bit arbitrary. It would also cause problems for those using the two Dmax approaches. The easiest test of all is the L4, also called the V4, which also has a high correlation with performance.

There have been several other studies that have showed the predictive power of a simple lactate test for performance. The longer the distance, the higher is the correlation between the lactate test and competition times. It is interesting that in order to avoid a lactate test, most cyclists will do an all-out one-hour time trial that is very difficult to complete and which requires strong motivation. Why would anyone do this when a simple 6-minute sub-maximal test tells the coach or athlete the same thing?

There is no magic. But lactate testing tells the knowledgeable coach a lot that no other testing can. This site is meant to help in understanding how to test and use the results.