Jan Olbrecht will be back in Knoxvile for a fourth time on Apr 6 and 7, 2018. The University of Tennessee and Mark Kredich host the fourth School of Thought Swim Clinic. This clinic features Jan Olbrecht along with Ernie Maglischo, Fiona Mather and Rachel Vickery.

Jan is recognized as one of the world’s foremost experts in the application of lactate testing to training design. His book “The Science of Winning” has become one of the most influential books written on training theory for swimming and is used by coaches of several different sports. Since the publication of the book 20 years ago, Olbrecht’s theories have been further validated on thousands of high level athletes who he has monitored over the years. Many of these athletes have been extremely successful and have won hundreds of World Championship and Olympic medals. It total Jan has advised athletes who have won over 600 Olympic, World Championship, European Championship and Commonwealth Championship medals. Jan will explain the training and physiological paradigm that is currently being used by the National Teams of Ireland, Scotland, Australia, the Netherlands, and Belgium, as well as coaches of Olympians in the US, France, and Great Britain. He will share case studies, expand on the ideas presented in his book, and help coaches plan their upcoming seasons. 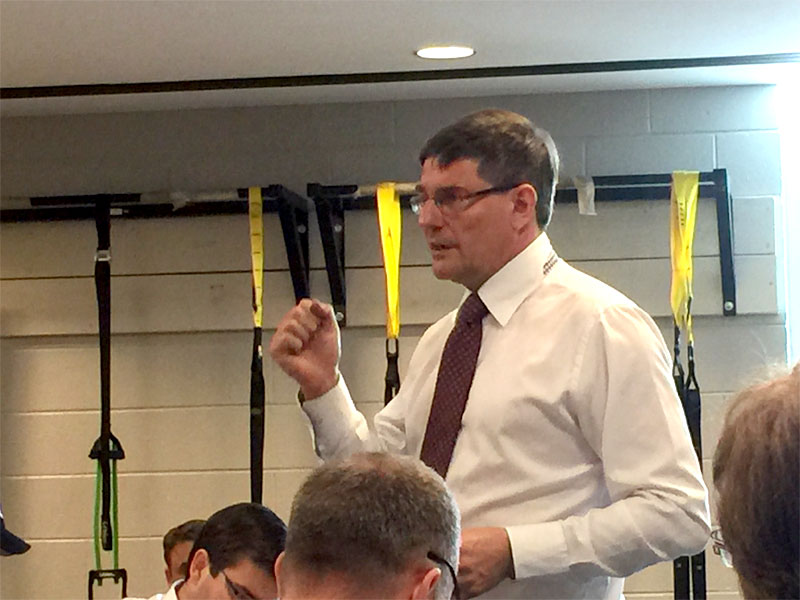 Jan speaks to the coaches during a session
on the training effects of various swim exercises
at previous clinic.

They were planning training exercises based on this chart from the Science of Winning. 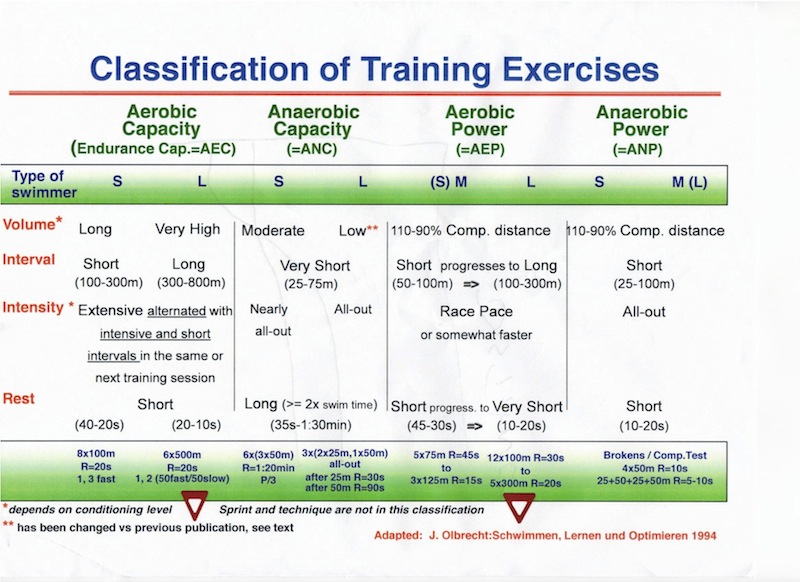 See our page on The Science of Winning. Jan discussed how he works with several national swim teams and other swim coaches. The Dutch team broke several world records at the Doha Short Course World Championships in 2014 and so did some of France's top swimmers who also work with Jan. He is also working with Jacco Verhaeren and several Australian swimmers. Swimmers who have worked with Jan have won over 70 Olympic medals and 175 medals in World long course and short course championships. They have also won over 350 medals in European championships.

Age Group swimmer to World Champion triathlete - Jan also wrote our triathlon site which we published in 1998 after Luc van Lierde set the world records in the Ironman at Kona and then ran the fastest Ironman in history at 7:50:27. Jan had first met Luc as an age group swimmer, primarily a breaststroke swimmer. In about 8 years under Jan's guidance, Luc became one of the top triathletes of all time. Jan continued to work with Luc throughout his triathlon career and still works with him as Luc has become one of the top triathlon coaches in Europe.

This triathlon site published in 1998 is here. Several years later, Jan then wrote an outline for training and testing for the triathlon. This was to be a chapter in a book on lactate testing. This book was never published but most of his article became part of our main site on the triathlon. There are ideas from others in this site so not every thing on this site is Jan's. Click here for the main triathlon site.

Swim coaches who train triathletes or have swimmers who want to become triathletes may want to explore Jan's ideas on this. The terminology that Jan uses in his presentation on swimming will make the triathlon sites a little clearer.

Jan uses a unique model of energy metabolism developed at the University of Cologne when he was a graduate student. A computer program was developed for this model which allows him to measure both the aerobic and anaerobic capacity of an athlete. From this model, training programs are developed that help the athlete optimize performance in any event from as little as a 50 m freestyle or 20-24 seconds to an Ironman which is 8 hours or more. See our page on the lactate threshold which discusses this model in detail.

Ernie has written what many coaches believe to be the most comprehensive textbooks on competitive swimming. The author of “Swimming Faster”, “Swimming Even Faster”, “Swimming Fastest”, and “A Primer for Swimming Coaches, Volumes I and II” will talk with us about several subjects that he’s been exploring, including “Biomolecular Adaptations to Training” and “The physiology of reverse periodization”. Ernie will also team up with Matt Barany and Erik Vendt to talk about “Heartrate Variablity as a Measurement for Prescribing Training Programs.”

Fiona is one of the most respected physiotherapists in the world. Through her position with HPSNZ, she currently works in support of numerous Olympic athletes across many sports. Fiona gained extensive experience with elite swimmers in the UK working with the National Team, including with Coach Chris Martin. Fiona has a highly developed outlook on the interplay of posture, movement, and the mechanisms for developing powerful and efficient movements in the water. I have asked her to talk with us about a little-discussed and relatively new concept in swimming anatomy, the function of the myofascial slings in storing and releasing energy. Throughout the weekend, Fiona will help coaches understand the structure of the myofascial slings and the relavance to teaching and correcting stroke mechanics. She’ll help us learn to “see” movement on land in the water from a unique and exciting perspective

Rachel has worked with some of the most successful athletes in the world today, including NBA All stars, professional Rugby and football players, cyclists, gymnasts, and swimmers. A key part of her work involves understanding the relationship of breathing to neuro-physiology and how this affects an athlete’s mental, emotional, physical and physiological performance. Too often an athlete operates in high states of arousal or “Fright and Flight”, leading to suboptimal performance. Despite advances in sports science this is still the part of performance that is not addressed in coach education.

Rachel will talk with us about strategies for helping the athletes we coach control their state through breathing in all environments, from their environment out of the water to the environment under the pressure of competition.

Friday, April 6 – Saturday, April 7 (each day will be the same format)

Fiona Mather: Foundations of Performance – The Myofascial Slings and Aquatic Movement – New Ways of “Seeing” movement. We will use live swimmers to demonstrate some of the concepts in Fiona’s talks.

Rachel Vickery: Foundations of Performance – Breathing and Performance Bring comfortable clothes - Coaches will learn techniques for breathing as a way to control states in many different environments and situations.